To celebrate Mahatma Gandhi’s 150th birthday, the Indian Institute of Technology Madras, or IIT Madras, has launched a fortnightly webinar series from 14 August 2020 on Self-reliant India: Discussion and Dialogue for Humane Innovations (SIDDHI).

The webinar series will concentrate on subjects such as socially important innovations, self-reliance education (Atmanirbhar Bharat), technology and rural development.

The webinar series is run by the Global Engagement Office, IIT Madras. The event will be streamed online on the institute’s YouTube channel.

“The objective of the SIDDHI Webinar Series is to disseminate the science behind technological solutions for societal problems among the general public, while also initiating a dialogue to identify socially relevant problems that need to be addressed,” Prof. Raghunathan Rengaswamy, Dean (GlobalEngagement), IIT Madras, said in a statement.

The opening committee session will be on ‘Food Security, Retrospect and Prospects’ on August 14. The webinar is available to everyone, and interested parties can apply at https://siddhi.iitm.ac.in said IIT Madras.

“The topic of Food Security was chosen as the threat of COVID-19 and its impact will be felt intensely on agriculture, economy, health, and nutrition. The first webinar on Food Security will be a panel discussion in which experts working in this field will discuss the most important issues confronting the nation,” an official statement said.

SIDDHI is a collective initiative of professors, scholars and students participating in projects funded by the Government of India under the Scheme for Promotion of Academic and Research Collaboration (SPARC), Visiting Advanced Joint Research (VAJRA), and socially important programs approved by the Government of India, such as Unnat Bharat Abhiyan and New India Internships, IIT Madras said.

78% Parents Wish To Skip A Year Of School During Pandemic 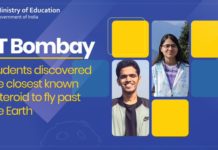